FIFA rankings may not be the perfect measurement of success but without a more coherent way to compare and contrast the world's footballing superpowers, it's a decent overview of where everyone stands.

Since the late 1990s, the sport's top countries have experienced significant fluctuations in FIFA's estimations due to the rigors of tournament play. It's worth looking at the major patterns to see what's changed over the past two decades and, in some cases, what's more or less the same.

How far ahead are the top-tier nations? And are teams like the U.S. and Mexico that far behind?

HOW THE CHART WORKS: Check the boxes to the right of each nation to highlight their individual progress. Click the country name to either add or remove them from the visual. Hover over the chart to see year-by-year rankings for each country.

U.S. vs. Mexico: El Tri have the edge 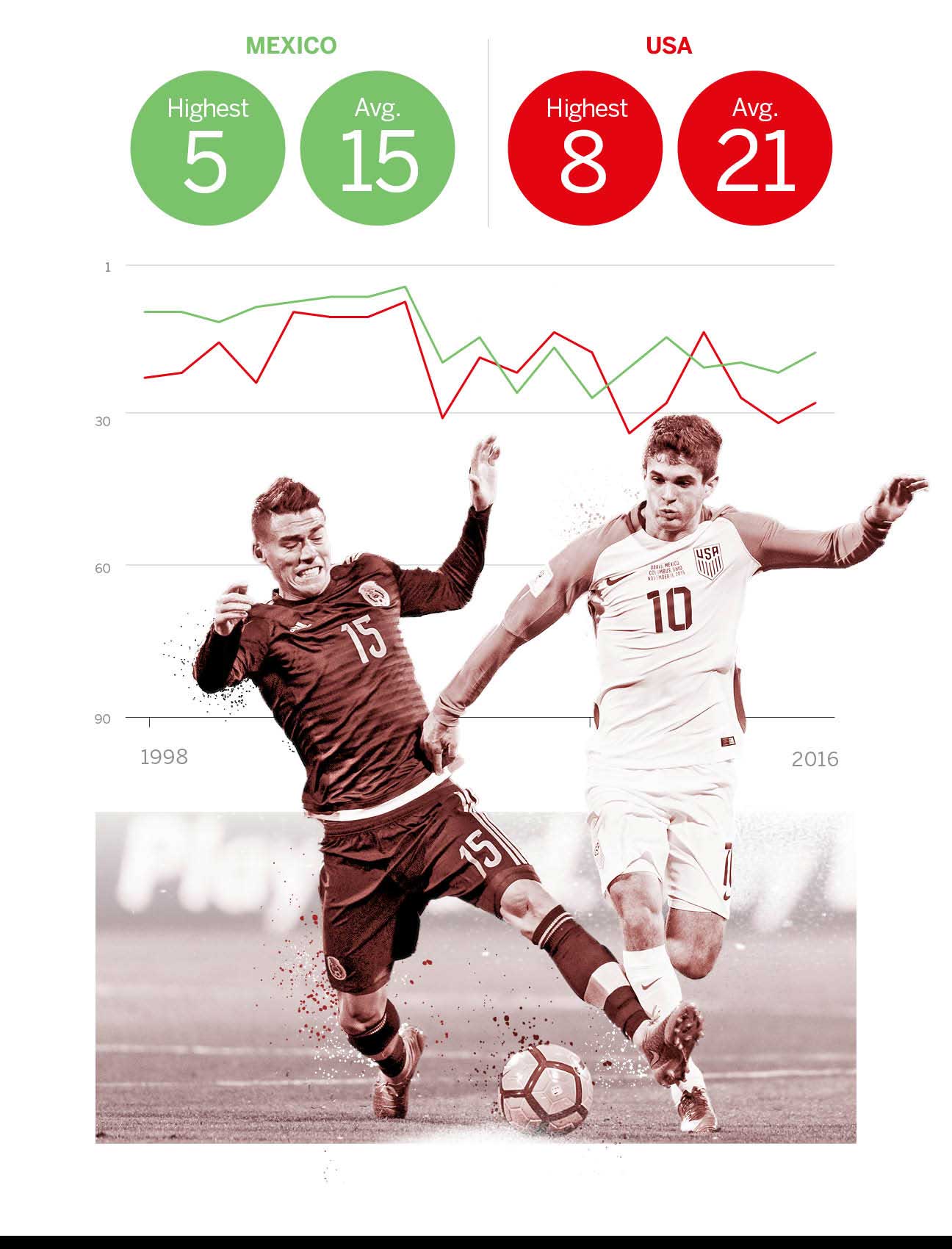 Even though the USMNT enjoy things like "dos a cero" (until 2016, at least) and other notable victories over their neighbors to the south -- for example, the 2-0 round of 16 victory at the 2002 World Cup -- they have steadily been a cut beneath El Tri in the eyes of FIFA.

Whether it's the consistency of Mexico's top players across Europe or the number of notable results in big games (2011 Gold Cup, 2015 CONCACAF Cup), there's been precious little for the U.S. to celebrate. Beyond Clint Dempsey, Landon Donovan and the latest crop of Americans abroad, the efforts of Javier "Chicharito" Hernandez (Manchester United, Real Madrid, Bayer Leverkusen), Rafa Marquez (Monaco, Barcelona), Carlos Vela (Arsenal, Real Sociedad) and the Dos Santos brothers, Giovani and Jonathan have outpaced the Yanks over time.

The best year for both sides was 2005: Mexico hit No. 5 thanks to a brilliant run through World Cup qualification, scoring 67 goals and winning 15 of 18 games en route to a seeded spot in 2006, while the USMNT won the Hex on a tie-breaker. However, a failure to win a single game in Germany that summer saw the Yanks plummet to 31st the following year while Mexico dropped to 20th after a last-16 exit.

The most damning thing for the U.S.? Arena takes over a team ranked worse than the one he took over two decades ago, and with a number of key players (Jermaine Jones, Clint Dempsey, Tim Howard) to eventually replace. Christian Pulisic leads the next generation, but he'll need help.

England: The ultimate "nearly there" 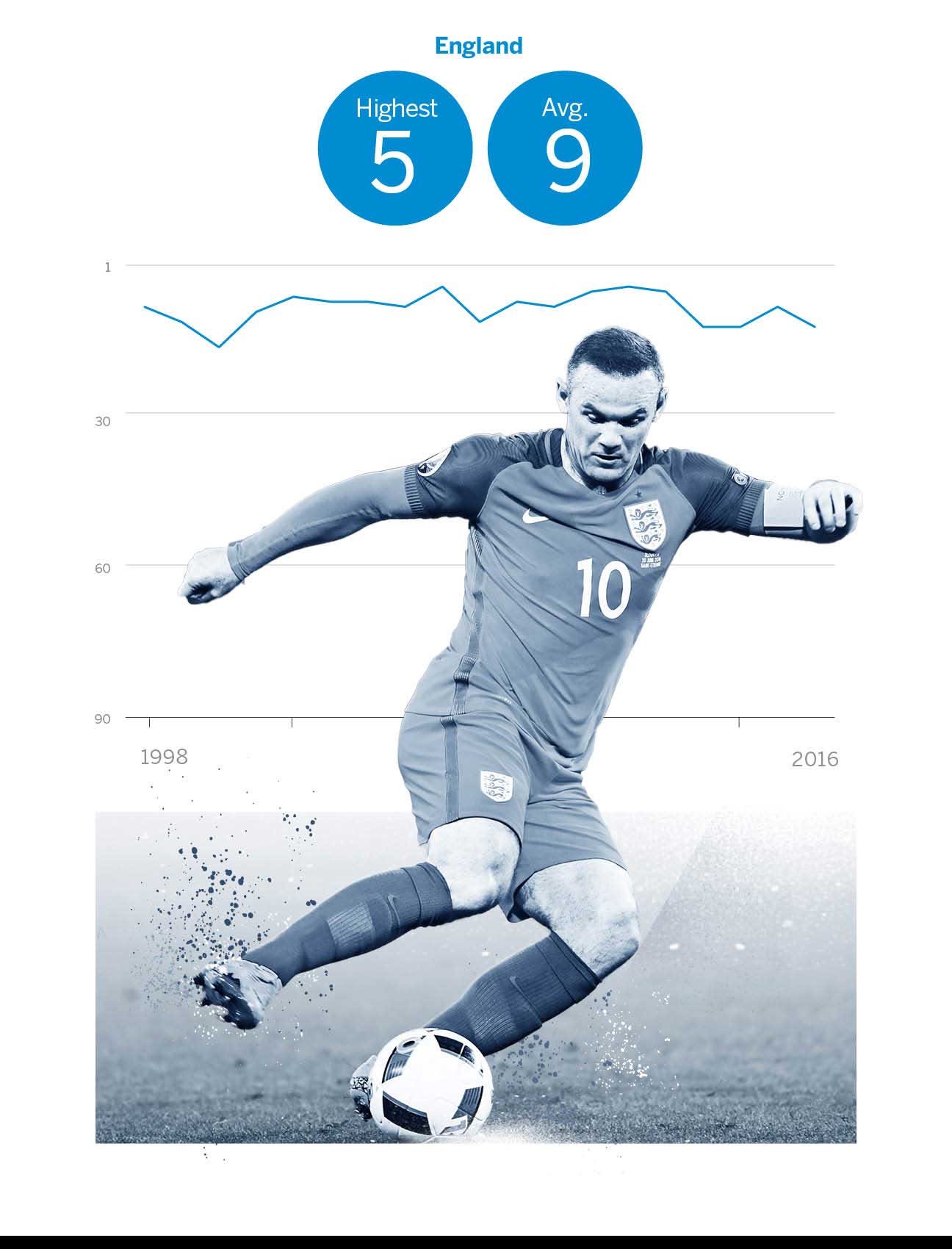 The biggest note for the Three Lions is that they are steadily around the Top 10: in the year-end rankings since 1998, they've only been worse than 10th on six occasions. It's a testament to their consistency in international play but more than that, it's a comment on the relative ease of UEFA when it comes to qualifying for major competitions.

Whether winning eight of 10 qualifiers en route to a quarterfinal defeat at the 2006 World Cup vs. Portugal (England finished the year ranked fifth overall, their highest mark in 20 years) or going undefeated in 2011 (ranked fifth) before a Euro 2012 quarterfinal defeat to Italy, the pattern keeps repeating: qualify with ease, build expectations and let the nation down come tournament time.

England suffered just five defeats from March 2010 to November 2012, a span of 34 games, but never came close to glory. To wit, their last semifinal appearance at a major competition was in Euro 1996. 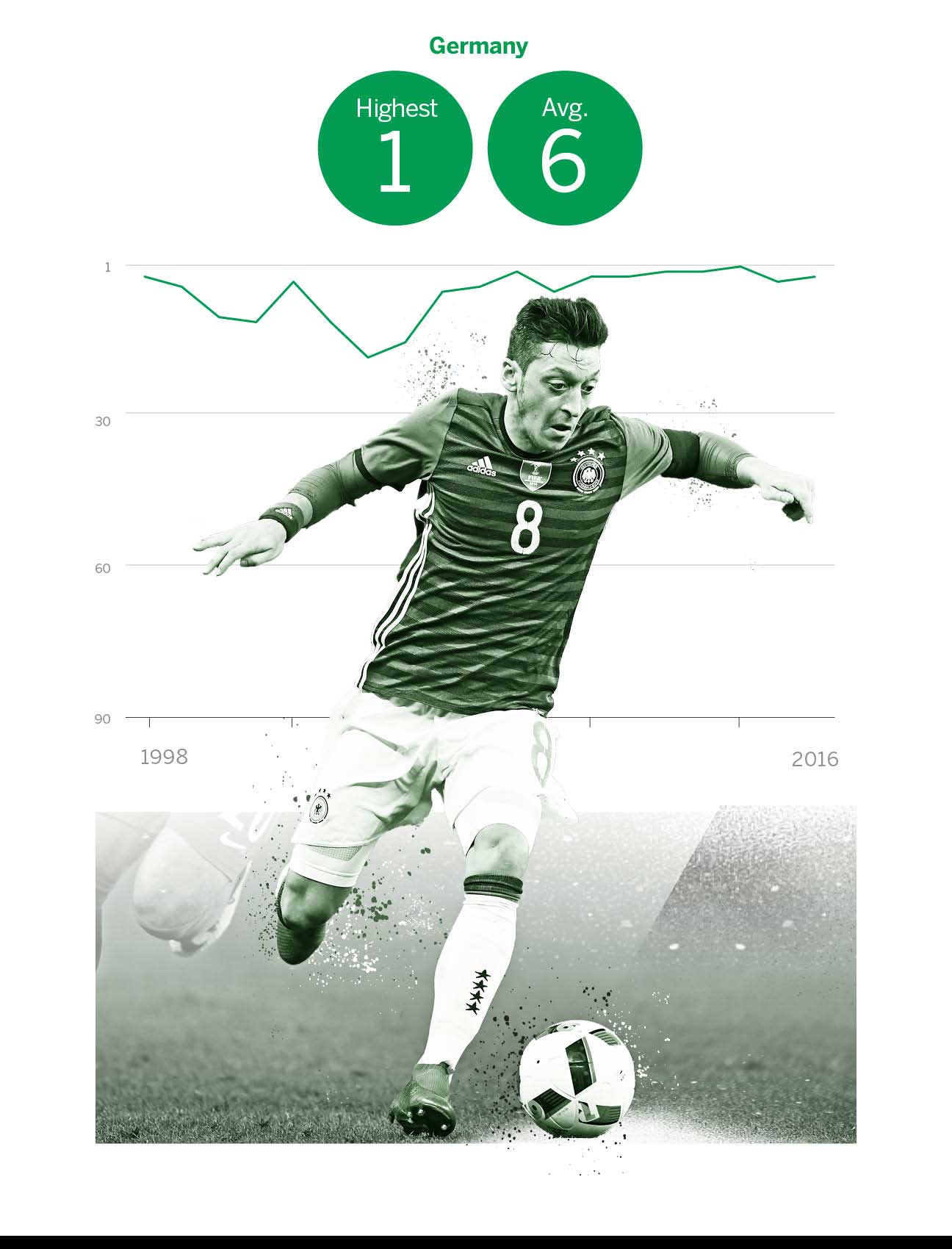 With the exception of a huge drop from fourth in 2002 to 19th in 2004 after a humiliating group stage exit at the Euros that year, Germany are arguably one of the benchmarks in international football over the past two decades. The story is well-told: a renewed effort by the DFB (Deutscher Fussball-Bund, Germany's FA) following similar embarrassment at Euro 2000 saw a flood of investment in national talent centers and requirements for Bundesliga clubs to build grassroots academies.

The aim was to "feed" players up through the ranks to the national team, and it worked: the emergence of anchors like Bastian Schweinsteiger, Philipp Lahm, Manuel Neuer, Mesut Ozil and Thomas Muller helped fuel a generation of success: they've not dropped lower than sixth in the year-end rankings since 2005, all while continuing to bring new talent through to form the backbone of future generations: Julian Weigl for Schweinsteiger, Joshua Kimmich for Lahm, Marc-Andre ter Stegen for Neuer and, perhaps, Julian Draxler for Muller.

And throughout this renewed focus on Die Mannschaft, only twice (Euro 2002 and Euro 2004) did they fail to reach at least the semifinals of a major tournament, even winning the World Cup in 2014 and finishing second in 2002 and at Euro 2008. 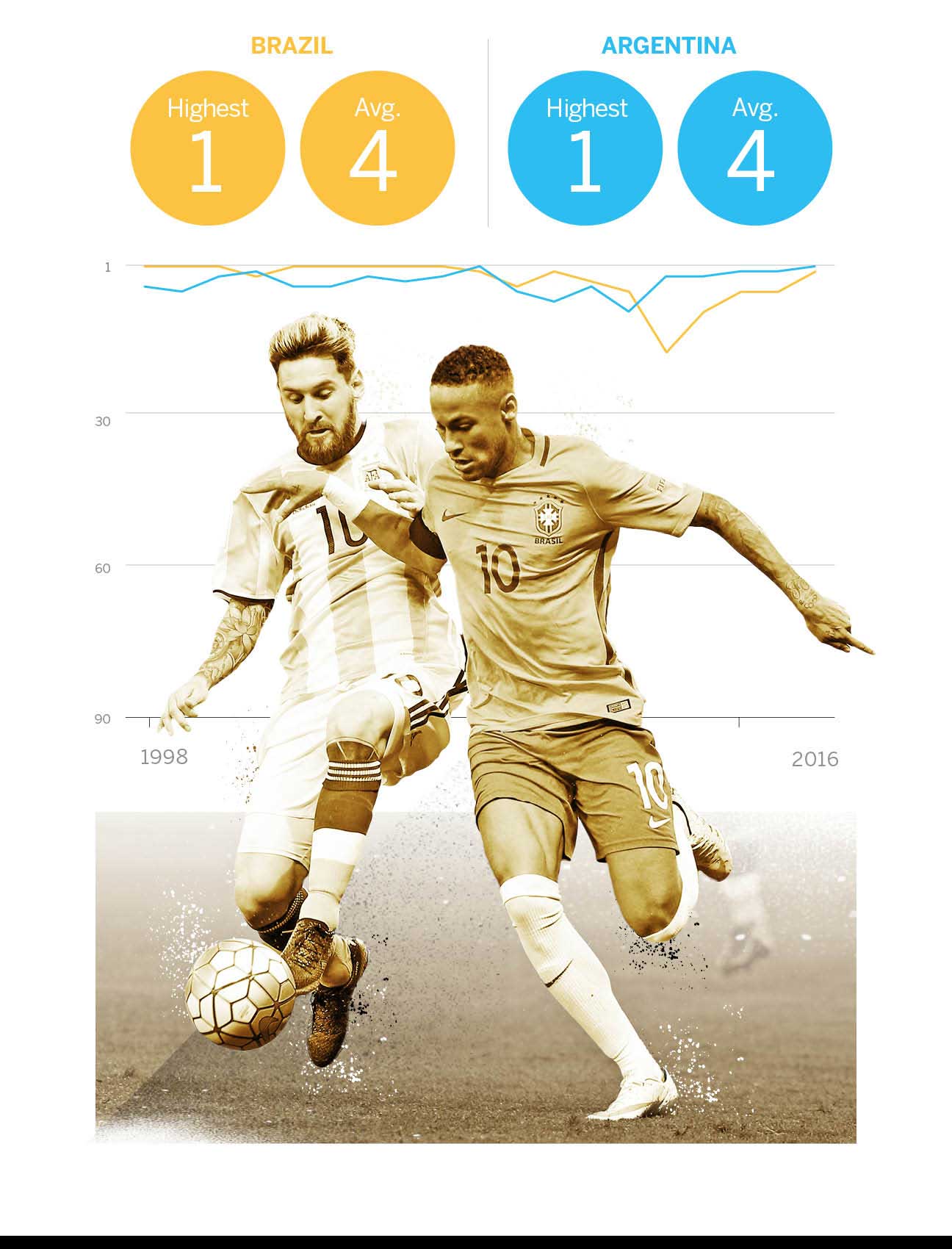 The Selecao lean on Neymar and as goes Lionel Messi, so goes Argentina. Yet the two stars have lived through wildly different generations with their respective countries.

Brazil were the best in the world at the end of 1998 thanks to their run to the World Cup final, remaining at No. 1 for seven of the nine years that followed including victory at the 2002 World Cup. The transition from Ronaldo to Neymar was a difficult one as they dropped as low as 12th in 2012 but despite having 10 different managers over the past 20 years, their natural talent helped mask any off-field problems. Winning three Confederations Cups and four Copa Americas since 1996 also covered up any apparent volatility or inflated expectations from fans.

Meanwhile, Argentina's wait for a major trophy -- their last World Cup was in 1986, their last Copa America in 1993 -- has kept them in that agonizing "nearly there" bracket throughout the international careers of two of their biggest ever stars, Carlos Tevez (debuted in 2004) and Lionel Messi (debuted in 2005). The clock ticks for Messi on a major trophy: they've been runner up in four of the last five Copa Americas and never lower than 10th in the FIFA rankings since Bruce Arena's first appearance as U.S. coach.

It feels a bit like England -- great in qualifying, desperately unlucky in competition -- only with, you know, Messi. 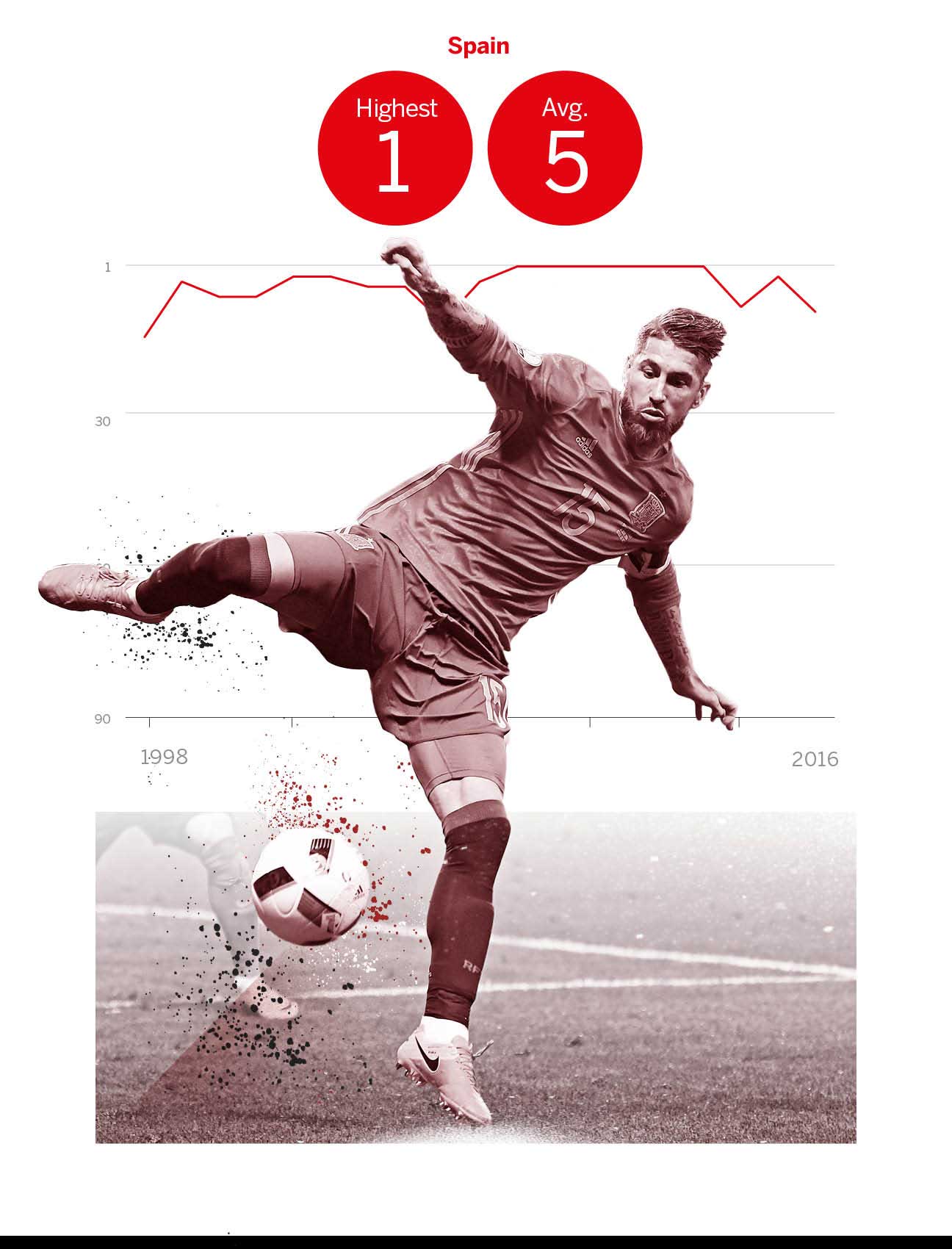 La Roja feel like something of an anomaly in international football having won Euro 2008, the 2010 World Cup and Euro 2012 with the same generation of players. This never happens on the national stage: too much can go wrong (injuries, loss of form, the ebb and flow of international football) but if anything, Spain have been the ultimate tournament team in modern football, never beaten even when not dominant.

But with that sustained success -- reflected in the FIFA rankings, they were No. 1 for six straight years, matching Brazil's run of the 2000s -- comes a tricky segue to a stunted generation who've waited longer than expected for their turn. As Iker Casillas, Sergio Ramos, Xavi, Andres Iniesta, David Silva (ahem) Fernando Torres fade out, the next wave is still finding its feet, as evidenced by their tepid round of 16 exit at last summer's Euros. 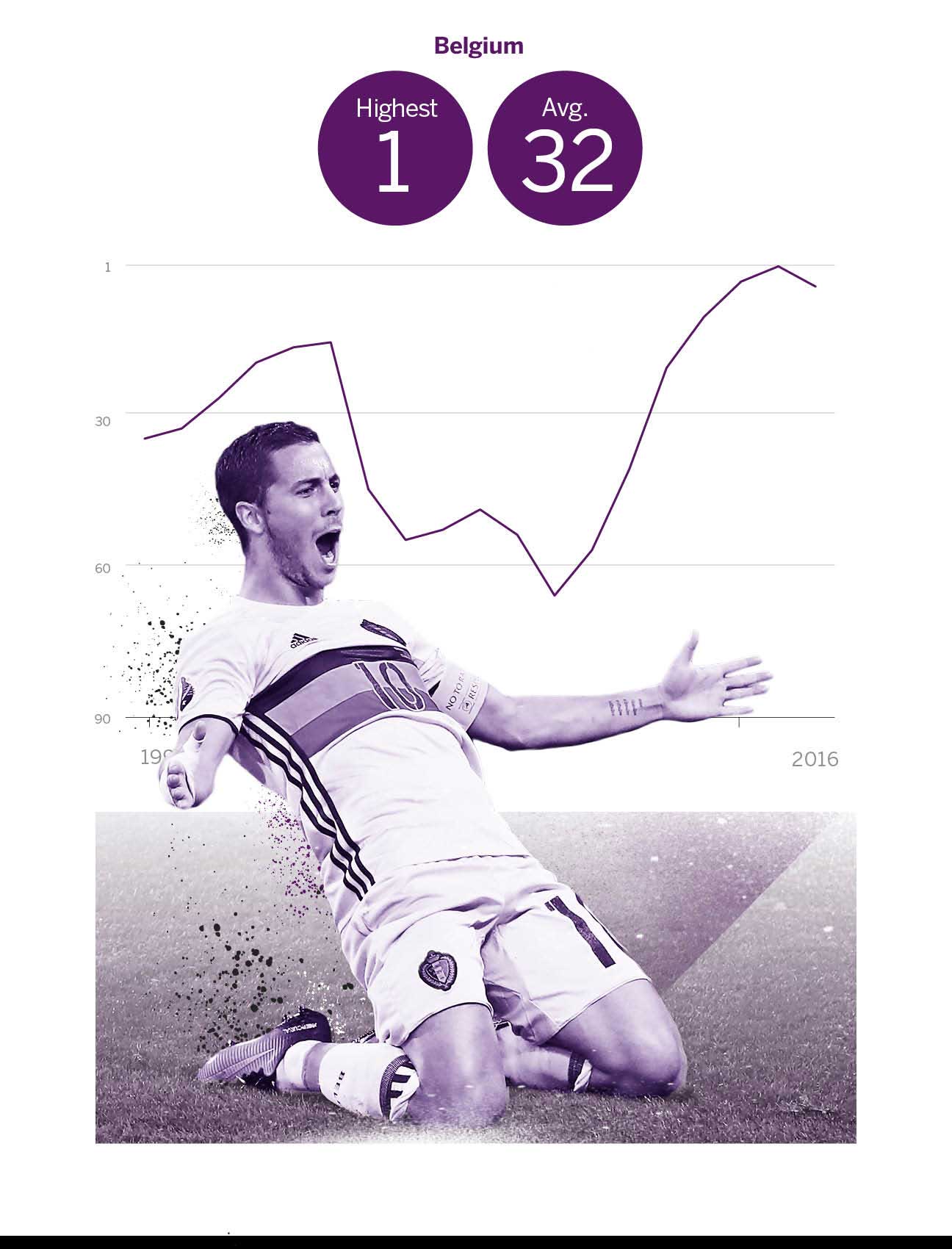 The Welsh boast Gareth Bale and Aaron Ramsey, Chile have dominated South America thanks to Arturo Vidal and Alexis Sanchez while the Belgians are enjoying the peak of a "Golden Generation" (Eden Hazard, Romelu Lukaku, Jan Vertonghen, Thibaut Courtois).

These clusters of all-world talent may come along seemingly by accident -- unlike Germany's ascent, Belgium's crop of megastars were largely developed by clubs in other countries -- but riding them high up the rankings isn't a difficult thing to do.